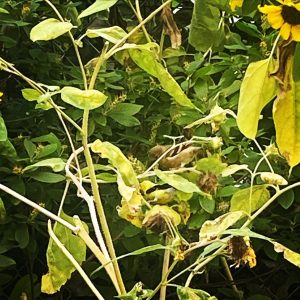 One of my favorite things to do is to be in nature (which Hippocrates called “the best physician”).

When I was a younger adult, and lived on higher floors sans balconies, I felt envious of folks with ground to grow herbs in — even an outdoor deck with potted plants or a front stoop to read the paper and watch passersby.

Now after many years of having both, I have come to terms with the fact that I am less gardener than walker-in-woods. There’s something in my nature that likes to be on the move, in spaces that are more wild than cultivated.

(Though I quit the Girl Scouts after just a few months when the other girls loudly made fun of my visibly psychically wounded mother, and my 12th floor terrace above the Brooklyn-Queens Expressway where I facilitated a Ranger Rick Club for about a year was hardly sufficient to promote any real survival skills.)
I’ve come to accept that I’m a life-long city dweller with forest fantasies.
Still, because I do have a bit of backyard, and I am nothing if not responsible steward, I spend time during the warmer months cultivating culinary herbs and making sure the soil in my pollinator garden is healthy and endlessly attempting to control the biting bugs and listening to the later summer crickets and, yes, drinking my coffee and reading the piled up Sunday NY Times.
As we approach the equinox and enter the season of fall (and for some of us, the new year and the Days of Awe), it is not planting seeds of envy but both delighting and letting go of the bounty that previous seasons brought.
These sunflowers, gifted to me as seedlings by my friend Daniel in spring, were like smiles every summer morning I stepped through the backdoor mosquito net.
Over the past ten days, a storm with high winds knocked a few out and put the survivors in “shlumpasana.”
Only now, close to their natural ending, did a male goldfinch start coming around. We’d watch his golden body gorging itself, delighted in every possible yogic position to get the right angle. (My favorite is upside down, like the fool in the tarot deck, who doesn’t know what’s coming and doesn’t give a shit either because pleasure is now.)
A few hours after that first visit, he came back again — this time, bringing his woman. He hasn’t been by those flowers alone since.
Yesterday, while walking back and forth to the alley where I was on a mission to sweep shards of broken bottles to safety, I twice forgot that they were on their end-of-season binge, and would come too close to the sunflowers. They’d shriek and flap their way to the neighbors’ crape myrtle, and I’d catch myself in momentary panic at what I’d done, only to realize they were back at it the minute I was out of arm’s length.
There is a bittersweetness to this time of year — to the indelible knowledge that nothing lasts, that we can’t hold onto anything we love without also letting it fall away.
Sometimes in this season, I do a lot of forgiveness practice, but this year, I’m finding it enough to find acceptance — at what I used to be envious of, of who I thought I would be when I had or became XYZ, at the reality of the seasons moving in time and what I still struggle with.
Still these two gave me joy and a sense of wonder and this too is what I’ll work on accepting this season. Happy Fall to each of you my friends!
xo