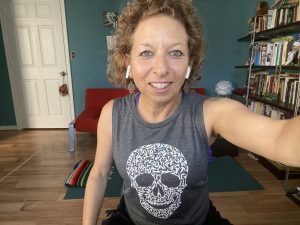 As I looked and looked around for photos that I could use to send you along with this note today (just in case you forgot what I look like), I realize how few photos of myself I take, especially for a yoga teacher.

I don’t do pretzel poses and I have not gone anywhere more exotic than Rock Creek Park in months. I’m middle aged and my back pretty much hurts 24/7 and I cannot strike a pose before 9 am at the earliest.
Also, I like to think of myself who cares more about what’s inside than how it presents on the outside (though, don’t we all?).

There’s the tension: the desire for substance over form, and jumping toward the shadow side so quickly that I sometimes do damage in the process.

Whenever there’s a crisis (especially those that concern white supremacists, Nazis, Michigan militia, incels, etc. etc.), I find myself obsessing over the news, scouring every last interview, compelled by the violent and macabre — supposedly as part of my path of non-avoidance — even as I know I personally do better with news involving K-Pop’s fan base. (I did abstain from watching the George Floyd video, though I celebrate the 17-year old who captured the murder on tape. A friend of mine was once killed on film by extremists. I felt as if I needed to accompany my friend to the Other Side, but have since decided that it’s not something I can do regularly.)

At the same time, because of my family history, I know at a cellular level that systemic oppression affects the victim-survivors deeply – and also, the oppressors, the bystanders and their families.

Sometimes, because we’re at least in some mythic way a culture of the underdog, I have found myself more sensitive to the impact that being placed in the oppressor role has on people who are mainly too powerless and too young to resist orders.

When I worked with children and grandchildren of Nazis, I found myself pitying them more than I did my fellow children and grandchildren of survivors. Once, while attending an anti-Nazi rally in Annapolis, I put myself between a couple of dozen of angry protestors and two men. It was instinctive. I’m not sure I would have done it had my brain taken in the actual facts: white men with swastika tattoos. Maybe they deserved a mob. Instead my body did what the body does, without any mind attached.

A few weeks ago, when peaceful protestors were treated to tear gas for a presidential photo op a 30-minute walk from my apartment, I felt trapped in a culture and country where I have never felt like I belonged.

Fast forward to now. I can’t remember ever feeling as hopeful – even just in the sense of possibility of change, of feeling that I’m a small part of something much bigger in which I something close to pride emerges.

How do we move so quickly from one end of the continuum to the other?

It’s seeing videos of mass levels of resistance – with some protestors toppling down confederate statues, others on bike or roller blade or doing the electric slide, yet others kneeling silently for 8 minutes and 46 seconds. Not just one protest, which no matter how large, will never change a damn thing. (Though it could help you feel part of a wider movement, which is not nothing!) But day-after-day actions for weeks on end, on every continent, from heterogeneous metropolises to all-white rural communities with a single main street. This has impact, pushing the conversation – and the legislation – deeper.

It’s hearing military leaders finally say there are orders we cannot obey. Reading profound perspectives on issues ranging from racism to health care to democracy to the limits of capitalism suddenly being covered in the mainstream media – and in yoga newsletters. Because who cares about mastering arm balances when what we really need to master is how to be in better relationship with ourselves, one another, the natural world around us.

Even with a sense of hope, these past few months haven’t been a cakewalk. A lot of us are muddling our way through, wondering how others seem to have been able to somehow transform themselves into bakers against racism, podcast hosts, ukulele aficionados.

Worthwhile goals — but the real gold (imho) is still in connection — to whatever and whoever is in your not-quite-lockdown life.

In an article this past week in the New York Times, Eileen Zimmerman notes “the most significant determinant of resilience — noted in nearly every review or study of resilience in the last 50 years — is the quality of our close personal relationships, especially with parents and primary caregivers.”

The thing is, even if those early relationships were shitty – if your parents were in their own sort of physical or emotional locked-away world when you most needed them, it’s never too late to hardwire that inner spunkiness.

In the end, it didn’t begin with you – or your parents, or theirs.  Just as what we’re living now did not begin in Georgia or Kentucky or Minnesota these past few months. It all goes way back and has permeated every aspect of your being. You carry it in your DNA. Who you are is not just about you and your family unit but the broader culture and context that gave birth to you.

We are wounded in relationship to one another. And that’s the same way we heal.

Yes, of course, there’s things you can do by yourself for yourself. Creative practice and hikes and anything called “self care” – but even more importantly, what helps us heal in in seeking purpose and community where we can place real energy into.

In some ways, this time of physical distancing has made us even more aware of our basic need for intimacy, companionship, and without a doubt, being part of organizing efforts.  You don’t need to be on the streets to be part of a movement.

For 17 years, I’ve lived in an intentional community named after Ella Jo Baker, the powerhouse civil rights leader. I’ve worked in organizations that were majority immigrant, refugee and people of color. In those settings I’ve generally played a strong support role to thoughtful and dynamic leaders, keeping myself reasonably behind-the-scenes.  While this is a smart strategy for those of us with light skin, it also happens to be the pattern I learned being the daughter of immigrant genocide survivors. Let your life give voice to something more important than you.

Even as I write how I have always been the leadership support, not the leader, a part of me thinks, wow, such smart strategy. Another part stumbles for words. And yet. And yet. What that also means is that you are not as important.

Is this practical advice for working multi-ethnically or a deeply embedded form of internalized oppression?

The only way I figure this out is by continuing to set aside a part of my life to doing the work. These days, it means sitting on the boards of organizations that matter to me while engaging in self-organizing and educating with grouping of friends and colleagues who are willing to go deep. It also has meant doing this same work on a personal level — i.e.,  inside my own head — with the goal of holding space for others in a more undefended way than I sometimes catch myself doing.

Last month, I used our stimulus checks to begin coursework with one of my favorite doctor-teachers, Gabor Mate.  Suddenly, I’m learning a therapeutic process called Compassionate Inquiry in a cohort and a pod and a dyad. In the midst of a pandemic and racial re-reckoning, I find myself in a community of strangers trying to understand how I’ve embodied – or shied away from – aspects of own life.

This leads me back to might be a more real reason for not having those photos. I look at photos, and I can’t help but to think not good enough, not important enough. Prove yourself through the work and do plenty of it.

That voice – which might be as familiar to you as it is to me — will likely be with me forever. What’s different right now is that I know it’s there. Just speaking or writing it vanquishes its power by a few percentage points.

I believe that we’re all being called — in myriad ways — to go beyond the surface at this odd portal of time. Do the inner work, and at the same time, do the outer work of finding a sense of purpose (at least in the now) + community building.  If you’ve been holding yourself back, or doubting yourself, no more. You need the world now as it needs you — not in some future time when things/you’ll be (good) enough. This doesn’t mean you steamroll your way in: you do it softly, maybe with guerilla knitters or dropping off snacks at BLM protests. Maybe you’re the one dancing in the streets.

If you do need to get your yin on. join me, in class or one-on-one.  I’ve decided to go for fewer classes this summer so that I can focus on the deep work – plus the time to play — that we also need now.

With love and the highest hopes for our shared future,
Yael