Five Things I Learned Doing a Cadaver Dissection, and How I Got There in the First Place 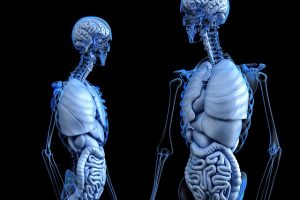 As a very small child, I thought nobody had grandparents.  I have an early memory of a TV special about what I now know to be the mythical practice of senicide in Japan: an elderly woman carried to a desolate mountaintop in winter by her son, and left there to die.  I was precocious but often connected the dots erroneously: having learned that my grandparents were “sent to the ovens,” I assumed that everyone over a certain age was killed, perhaps so that they wouldn’t be a burden.

Later, when I was perhaps five or six, I’d realize that most of the kids in my neighborhood actually had at least a couple of living grandparents, which meant that the ovens were particular, rather than universal. I’d also learn that death itself did not happen in the ovens, but in the showers, induced by Zyklon B. (This didn’t stop me from imagining what it would be like to be shut in a small place and be burned alive. Now I could add another image of my death: suffocating in a shower stall. Perhaps not uncoincidentally, I strongly preferred baths in childhood, until age 11 or so when I spent the summer at sleepaway camp, and had no choice but to get used to the water streaming downwards. I still do not like small, windowless spaces, but use breathing practices to get through MRIs, for instance)

My parents were conflicted in how to approach the subject of death with me. On one hand, when I was in kindergarten, my mother shared that human flesh has a particular smell when it burns, that the smell can carry for miles, that it wasn’t unlike the smell of burnt cheese the wind would sometimes bring our way from the dairy pasteurization plant in neighboring Maspeth. On the other, my parents forbade me from wearing black until I was about 12. Black was the color of mourning, was not for children, and I had everything to live for.  Herein lay the rub: my life was supposed to be full of life, though death always lurked nearby in the background, like the whirring of a million neighbors’ air conditioning units. If I wasn’t joyful, it was akin to desecrating the dead, as though my sadness would give Hitler the posthumous victory he fully expected.

All these years later, I have that same push-and-pull relationship with death. I’ve lost people I’ve loved and have had the honor of holding space for those who were dying. I have made a pilgrimage to Auschwitz to light a candle and say Kaddish for my dead, practiced my own death in Buddhist meditations and yoga classes, had visions of and blessed, even assisted, the dead in shamanic circles, offered Reiki to friends with advanced cancers when there was nothing left unsaid.

Yet, with the exception of my mother – whose body I saw but could not bring myself to come close to, as though we were similar poles of two magnets – I had never been around a dead human. (I’m not counting the ones already boxed up or shot full up with preservatives.)

I teach that anything we’re avoiding is probably the very thing we should at least explore conceptually if not IRL. (Except jumping out of airplanes. I fully intend to die without that experience!)

As a teacher of yoga teachers, I also wanted to get more ease around the physical body and anatomy. I knew there was no better way of doing this than doing a cadaver dissection, although as a person with a sensitive olfactory system and a general queasiness around bodily fluids, this isn’t something I decided upon lightly.

In retrospect, perhaps I have been preparing for it for years.  I knew exactly who I’d study with: Gil Hedley, a rolfer and poet with a doctorate in theology who calls himself a somanaut (“exploring inner space”). I first learned about Gil in 2007 through Yin Yoga creator and functional anatomy expert Paul Grilley and even hosted a viewing party of one of his dissection videos (“the skin and superficial fascia”) with a group of fellow yoga teachers in 2010. A couple of years ago, I read a book about the sordid history of and cross-cultural approaches to cadaver dissection in medical schools around the world. (Spoilers alert: in southeast Asia, they treat the dead bodies with utmost respect and gratitude. In the west, not so much.)

Finally, this year, I enrolled in a five-day “unfixed” (read formaldehyde-free) intensive, which I took in early June.  There were 18 students, mainly bodyworkers and yoga teachers.  I’ll start by saying that there are not that many places where non-medical/health practitioners can go to do this kind of work, and it is a privilege and honor that there are donors (and families) willing to let people like me explore their forms between death and cremation.

Here are a handful of my takeaways from doing this dissection course, which I believe would apply to any learning experience you undertake.

There were many small and extraordinary good teaching moments I could share with you now, but here’s one from day four. Gil was dissecting a thymus gland from another cadaver in the room, explaining how it trains T cells to distinguish between domestic and foreign. He compared the immune system to goats eating up unwanted weeds from a field. I was all ears and eyes standing just to his side. Suddenly, he turned to me and said “I hate martial metaphors for the immune system!”  So do I. I didn’t go to war with cancer: I had my tumors surgically excised and then used herbs and homeopathics to strengthen my detox pathways and support my immune function. Yael in fact means “ibex” in Hebrew.  I like thinking that my cells are versions of happy mountain goats frolicking away, chomping on what they know doesn’t belong.

For example, I had a FOMO (fear of missing out) moment come up on day one, when we were asked to choose one from among the three cadavers we would work with for the week. I wound up with the one I had the most visceral reaction to (he had leaked blood out of his nose when Gil sat him up and had visible blisters on his skin). I thought it would be comforting to be with the two students in the course who had studied with my Yin teacher and who had never done a dissection before, but they wound up in another group.  I had to keep reminding myself that whatever happens happens for a reason, and I would learn a lot. Right place, right time, kind of mantra. Sure enough, I was the only first timer at my table, which proved to be somewhat challenging throughout the week. And my cadaver – a white male from Texas we nicknamed “Big Red” – turned out to have bad edema. He was wet and leaked everywhere. All over my coat. The floor. The table. I repeatedly reminded myself of how much vulnerability-courage it takes to know that in death, you will be naked and on display on a metal table. I kept thanking Big Red for doing that for me, and for my students back home. That night, I went and took a long walk in the park by my Airbnb and reflected on where else FOMO had shown up in my life.  That proved interesting enough to make me want to change course and recommit to where I was, rather than endlessly long for somewhere else, or tell myself that I had made the wrong choice.

Other similar insight-provoking patterns emerged on subsequent days. For instance, my clumsiness compared to my tablemates’ fine motor skills and careful approach brought up repeated thoughts of how I wish I was more crafty and had developed a better sense of touch and how I wasn’t meant for this work. I would feel guilt while hacking away a tissue that someone else might have sliced off with precision. I tried to tell myself that the only way to get better is in the doing. Though my tablemates’ insisted they were as lost as I was regardless of how many dissections they had done previously, I didn’t buy it: I know from other experiences that there’s something even inexplicable you learn when you go through a process, and have a notion of what to expect and what comes next – even if every time is new.

That day at lunch, the fortune in my cookie read “Fall down seven times, stand up eighth time.”

Indeed, toward the end of the week when I was at the point that I felt like I didn’t want to ever descend to the lab again, I read a section of Gil’s workshop manual which argued that being “settled into general terror and confusion and waiting silent in human physical form while your attention is cruising around avidly on the astral plane searching for safety and comfort…….represent strategies for removing oneself from the actual and immediate experience of the moment.”  It wasn’t just about the dissection, or Big Red’s edema, or my ineptitude at using a hemostat and scalpel. I had long standing defense mechanisms that included checking out, in physical or psychological form. And here was as good an opportunity to apply a course correction.

The hours I wasn’t at the lab, I would do what I could to take care of myself. One night that meant a delightful plate of truffle fries and a couple of drinks with a rolfer from the left coast I adored. Most nights though, it was just me and the park and the sky and my mat and as long as possible in a cozy bed. Every morning at 8:30, I’d sit in the circle, and silently recommit myself to bringing a full and grounded quality of presence to the work – both the dissection, and to my own learning and growth.

The German poet Rilke wrote “Death is our friend precisely because it brings us into absolute and passionate presence with all that is here, that is natural, that is love… Life always says Yes and No simultaneously. Death (I implore you to believe) is the true Yea-sayer. It stands before eternity and says only: Yes.” There is so much richness to being around death and the dead – mainly, how it teaches us how we want to live, how much life already surrounds us.