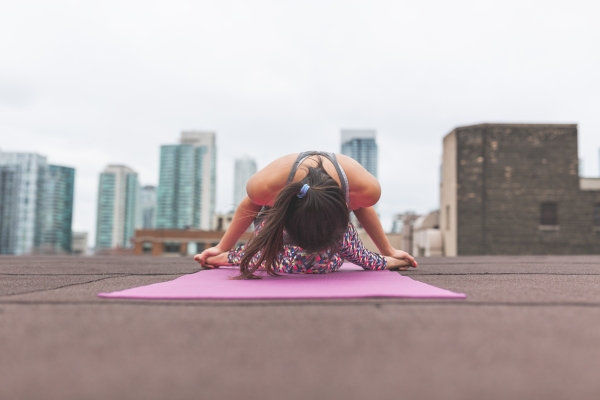 As though I needed an excuse, about a month back, I took a 50-hour Yin Yoga Teacher Training with Biff Mithoefer. After ten years of teaching Yin (and now teaching yoga teachers how to teach Yin well), I wasn’t really expecting to pick up many new tricks. What I love about Yin is how uncomplicated and elegant the practice is; you learn a basic set of poses and some different ways to approach it, and then the best way of continued learning is to uncover the strata of meaning as you keep a consistent practice. But I had fallen in love with Biff’s approach back in April, when he was kind enough to engage in a back and forth with me – a total stranger – over email and the phone about the relationship of Yin Yoga and trauma, which made me want to hang out with him for longer and pick up whatever I could.

My interest in trauma began in earnest in my 20s, working with Central American refugees and immigrants – many of whom told me harrowing stories of being imprisoned or tortured or having their best friend killed in front of them or just walking by dead bodies at the side of the road, and wondering when their turn would come. I’m not a personal-professional split personality: who I work with is who I hang out with, is who I break bread and share wine with, is who I love.  I felt a keen sense of familiarity with how my friends approached life – with generosity and an eye to game changing and movement building. They’d make me mix tapes packed with boleros, bachata and balladeers and we’d drink wine and discuss political strategy and cultural appropriation deep into the night.

Around this same time, I joined a group for Children of Holocaust Survivors. We met once a month, reading novels, memoirs and nonfiction to jump-start discussion on everything from the spiritual dilemma of a just and loving God with the backdrop of our families’ murders, to intergenerational transfer of trauma, to the commonalities we as a group had despite obvious differences – those of us whose parents, say, were part of resistance movements, seemed to have an easier time in dealing with life’s unavoidable fluxes, perhaps because their parents’ weren’t as broken as those of us whose parents were part of the Kindertransport and grew up in foster families or orphanages – or those of us whose parents had survived concentration camps, were the most palpably wounded, and found it difficult to not share their lifelong pain with their children, usually from too early an age, in ways that overwhelmed our own abilities to cope.

Connecting the dots, I realized that what was so appealing about my work was war: I got to work it with people who had parallel life experiences with my parents, and yet weren’t as visibly damaged in their response to these experiences.

Perhaps it’s for the best that during this time of intense engagement in my daily life and psycho-intellectually with the concepts and impact of trauma, I also began practicing yoga — and writing creatively – both of which taught me how to find ground in volatile periods of my own learning how to be an adult different than my own adults were.

I can’t underestimate how healing it was to also be engaged in a strong activist movement, to witness and experience the choices people are capable of making happen in the wake of great personal suffering and collective trauma – often by working diligently, strategically and collaboratively to find justice where possible and reconcile with the past where not.

When I spoke with Biff this spring, I knew there are no studies on Yin Yoga and trauma – there’s only one study on Yin that I know of (surprise, it’s shown to reduce worry and stress!). Yet after ten years of practicing it (and twenty practicing yoga overall), I’ve come to believe that it plays a special role in discharging stress and trauma.

Biff and I talked about how that might be – does it heal trauma that has been left in the body, particularly the fascia, long after the traumatic event or periods of complex trauma? Does it release or help us deal more easily with trauma in the same way mindfulness has been shown to? Does it teach us to accept what happened to us and slowly find completion with that?

I spoke with a lot of people around this over the following months who told me story after story of stress-exacerbated and auto-immune conditions which are made better by a regular Yin practice. One military vet from Australia with chronic pain who was told he’d be on medication his whole life healed himself and has begun to teach Yin to other vets.

We still can’t spell out a causal relationship – and no one practice works for everyone (if you’re hypermobile, you might want to lift weights instead) – but as for myself, I’m not giving up on practicing or teaching Yin anytime soon.

I’d recommend studying with Biff if he ever comes your way – or if you just need a good excuse. I love that he always teaches in circle so that participants are intentionally woven together in community. He’s sensitive and practical and also incorporates teachings such as the medicine wheel, Jungian archetypes, and poetry and storytelling, which give great depth to the Yin practice, allowing you to come back to the same poses, over and over again, each time with a fresh layer of understanding.

Would love to hear your own experiences and thoughts!