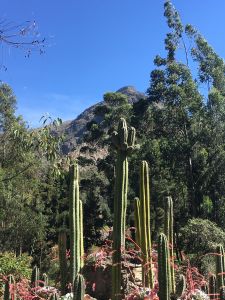 In June, I went to Peru for a few weeks to do a spiritual retreat in the Andes, for which the current euphemism seems to be “working with plant medicine.”

Last year, I led my first solo international yoga retreat a couple of weeks after I had been diagnosed with breast cancer.  My plan was not to divulge anything; after all, this was their retreat. My intention was to hold the space for whatever they were carrying in their lives to emerge, be explored, and lightened, if not transformed.  But the realities of the situation were such that my silence didn’t even last 18 hours.

Even though mine was an early-stage diagnosis with an excellent prognosis (with a 98% chance of being alive in five years), I had moments when I thought that the peanut-sized tumor in my right breast was merely a physical manifestation of something inherently malignant about me. It was bringing up so much for me to work with, all at once: my complicated relationship to my body and my sense of self; old medical trauma, some that I’ve had since many childhood visits to doctors and hospitals, some inherited by listening to too many stories about doctors who performed human experiments in camps where my mother was interned; and distrust of cancer treatments as they mainly involved cutting off body parts or exposing myself to energies and medicines that I explicitly try to avoid to name a few.  (I’ve become the kind of person who prefers a TSA pat-down to going through millimeter wave scanners.)

It wasn’t that I didn’t think I’d get through it; I knew then that I would, because (1) the odds were hugely in my favor, (2) I had gotten through much larger and scarier scenarios at a much younger age with far less maturity and internal capacity; (3) three years before, I married and moved in with a bonafide physician, who had helped his own mother survive a particularly aggressive cancer some years earlier; (4) I worked at an integrative medicine clinic with top-notch practitioners and I knew in my bones that if they could help people with stage 4 cancer live better, I was in the best of hands; and (5) I had a circle of loving and generous friends, who made me feel that I could tap into their support when I needed it. (And I did, often). If there was ever a “good time” for me to get cancer, this was clearly it.

So while I didn’t need the retreat participants to take care of me in any way, I was afraid that by sharing my news with them, they’d feel that I couldn’t take care of them and their needs. And isn’t that why someone goes on a retreat, I thought.

One of the participants, a long-time student who had moved to Brooklyn the year before and who I hadn’t seen since, caught me alone the first evening and asked me how I was doing, and what was new, and what else was going on, and how was I feeling about life, and on and on, genuinely happy to see me.

I know that other people are skillful compartmentalizers (take Bill Clinton, who was negotiating whether to send US troops to Bosnia while Ken Starr was interrogating Monica Lewinsky, or pilots who can’t let a bad day – even one in which your spouse decides to leave you for your best friend – intervene with their day-gig). For me, keeping things that separate is possible only if I expend a ton of energy in pretending that everything is cool. I can do it, but I wind up restraining other good parts of myself — which I thought might actually help folks get something of use out of the retreat. I’d have to share, and navigate through any consequences.

What happened in the immediate aftermath after I circled the group around and told them my news was not surprising: they were kind and told me stories of their mothers’ experiences with breast cancer, or mirrored back to me the qualities that they saw me bringing to this unexpected chapter in my life. But in the days that followed, I was stunned to see the group meld in a way few groups do. In the coolness of late afternoon, we would do a long yin yoga practice on our perch overlooking the Pacific. Afterwards, I’d read them a poem, and offer two or three “prompts” for them to write to. The first time, I invited people to share just a few words of what they wrote, assuming they’d be too shy with one another to  do more than that. To my surprise, by day two, everyone was sharing their entire passage with one another – and the sharing would continue into dinner and beyond.

After the retreat ended and we flew back to our regular lives, the group astounded me by telling me that my sharing what was going on for me gave them permission to be honest with themselves and each other in a more profound way — and it was that level of engagement that made the retreat more than just a few days in an exotic locale to do daily yoga, but they each went home and were able to transform something in their own lives. One woman, for instance, quit a job that she was no longer suited for and decided to move across the country to pursue a lifelong dream in writing for television.

Months later, after I had two surgeries and was equipped with a full array of pathological and genetic and genomic reports which guided my decision making around treatment, and settled into my post-cancer life, it occurred to me that if I was going to keep leading retreats, I would have to commit to engaging in the process myself.

Breast cancer is often late occurring; that is, once you have it, your chances of getting it again are higher than the average person who hasn’t. So in a way, once you have it, you live with the possibility of it coming back for the rest of your life. In the aftermath of the diagnosis, I had overhauled my diet and also included an array of daily supplements, herbs and homeopathic remedies with two main goals: (1) to strengthen my immune system so that any cancer cells in my system wouldn’t stick, and (2) to support my liver in getting rid of excess estrogens and toxins.  I already did a lot of the recommended things to prevent cancer recurrence – get regular exercise, engage in mindfulness practices, volunteer, have a strong support network – but I felt I needed to do more to normalize my wildly vacillating stress levels and generally improve my psychological state. Working at the level of nervous system and mental habits would be akin to immunotherapy.

Though I had done deep work during my period with cancer, I decided I needed to do even more. Plant medicine seemed to hold the potential to let me release underlying patterns and habits that I couldn’t touch with mindfulness or will alone.

I have always been drawn to shamanism and to plants — but not necessarily the two together. I briefly studied with a shamanic rabbi, which in part helped me heal my rifted relationship with Judaism. My honey and I had completed a nine-month shamanic apprenticeship the year before which reignited my belief that nature is the missing element in our healing and growth.  In my personal practice, I had found myself drifting away from sitting meditation and toward shamanic journeying.  But while ayahuasca is ubiquitous – indeed, who can resist reading an article titled “The Drug of Choice in the Age of Kale”? – there was the ewwwwwwww element (read: vomiting into buckets with other people in the room). And yet, so many people I loved and respected found it to be an incredibly healing experience.

So while part of me was grappling with do I take the plunge and go to the Amazon and do ayahuasca, another wiser part of me decided to let my intuition do the work and “wait” for a retreat to come to me. In December, one did. A writer whose books I admired, Robert Tindall, usually leads retreats to the Amazon to work with Juan Flores, a well-respected Ashaninka shaman who had created a 180-hectare reserve in the Amazon that includes a sacred stream known as the Boiling River (as a side note, you might check out Andres Ruzo’s fascinating TED talk on the subject here)

Ironically, I didn’t have to decide about purging or not, because this retreat was not heading there!  Robert was taking a group to the Andes, to do ceremonies on the site of a pre-Incan temple named Chavin de Huantar, and to work with a medicine I had never heard of: Huachuma which later became known as San Pedro when the Spanish conquistadors explained that they had a quick path to the portals of heaven where you’d be met by none other than Saint Peter. So do we, responded the locals. I did my due diligence, which mainly meant googling and youtubing, and learned that Huachuma was considered a master teacher, and although sense-opening, not exactly a hallucinogen in the class of ayahuasca, but rather a visionary medicine, which brings insights about the natural world, including ourselves. I had skype call with Robert which gave me a good feeling. The next thing I knew, I was booked for an early summer trip to Peru.

So if you’ve read this far (thank you!), leading a retreat and having breast cancer led me to a small town in the Andes with a group of folks I’d never met, to do a medicine I’d only heard about six months prior. Next month, I’ll share some more about the retreat itself and what I learned.